During a sightseeing tour of Kaliningrad (the former Koenigsberg) with a visit to historical sites and monuments, one can see the unique face of the city, in which the combination of modern Russian culture with the historical German heritage is noticeably visible. 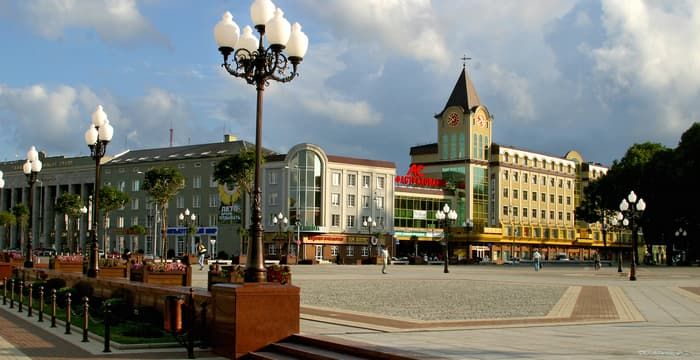 As part of the excursion, you can visit the island of Kant (formerly Kneiphof), where the Cathedral of the XIV century is located and the grave of the famous philosopher, in honor of which the island was named, see bridges, ancient churches, city gates and other, as well as learn about the unique history of the city of the two names and cultures.

The sightseeing tour can include virtual walks through Koenigsberg at the beginning of the 20th century at the Museum of the Friedland Gate, a mini-concert at one of  the gratest institutions in Europe, a tour of pre-war houses, a visit to the main squares of the city: Pobedy Square and Vasilevsky Square , as well as external view of fortifications.

Offers in the spring-summer period (the schedule can also be kept year-round):

Tour agency "Yunona": "History of Koenigsberg-Kaliningrad" ; "Königsberg is a cute and gracious city!" (Visiting the old districts of Amalienau and Khufen, visiting the apartment museum Altes Haus-Hufen); "Mysterious Koenigsberg". You can make an appointment by phone. +7 (4012) 30 70 02; site of the tour agency  www.kldtur.ru Departure from the office of the tour operator on Oktyabrskaya Str.,8.

Travel agency "Korolevskiy zamok": "Stories and mysteries of Koenigsberg-Kaliningrad"  - on Mondays, Wednesdays and Fridays. You can make an appointment by phone. +7 (4012) 35 07 82, 77 66 75; site of travel agency kaliningradinfo.ru

Tour agency "Yantarniy krai": "Koenigsberg in Kaliningrad, Kaliningrad in Koenigsberg" - on Sundays. You can make an appointment by phone. +7 (4012) 53 30 53; site of the tour operator  www.amber-region.ru

Travel Agencies working for the reception of tourists in the Kaliningrad region.