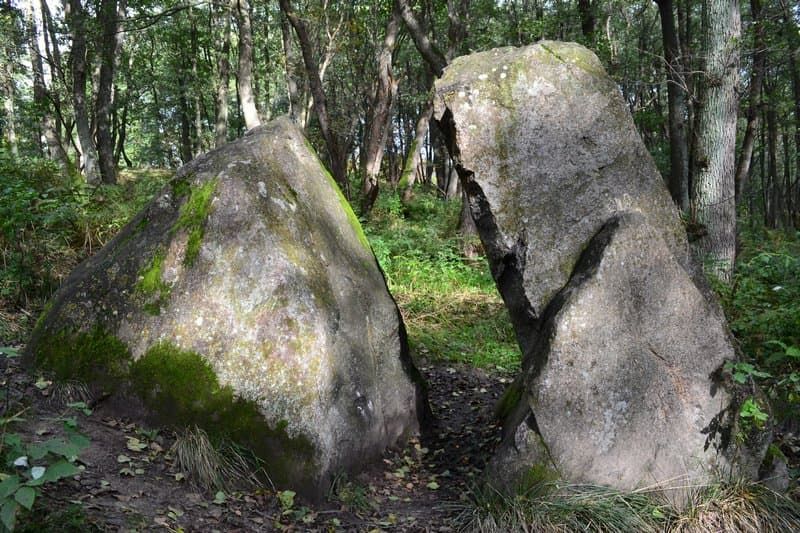 The Stone of Lies is located in the grove on the banks of the Chisty Stream, in the southwestern part of Pionersky. This is a giant stone, split into two unequal parts, taller than a man, resembling the poles of a large magnet, between which you can freely pass. According to one version, the stone was brought by the glacier many thousands of years ago. There are many legends and myths about it. There is a belief that the stone punishes the liars and fulfills the desires of honest people. For the ancient Prussians, the area on which Pionersky is now located was of particular importance. The grove was sacred. Rituals were held near the stone, and ritual fire was lit. The stone was dangerous for liars. If there were suspicions that a person is lying, his/her hand was placed between the stones, and according to legend, the deceiver was left without a hand. In the German period, women who almost lost hope of having children also went to the stone, which helped them to find what they wanted. Nowadays, psychic mediums claim that in the grove area, in the place where the stone is located, there is a powerful bioenergy anomaly. Many other legends are associated with the Stone of Lies. To this day, quite a few people share their most intimate desires with a stone. To do this, you need to walk around the stones three times, mentally speaking your desire. It is said that if it is kind, then it is destined to come true. Excursions to the Stone of Lie are conducted by the historical and archaeological museum Rantava. For all who wishes to have the opportunity to light the sacred fire and touch the ancient world of Prussians, as well as make a wish that will surely be fulfilled!