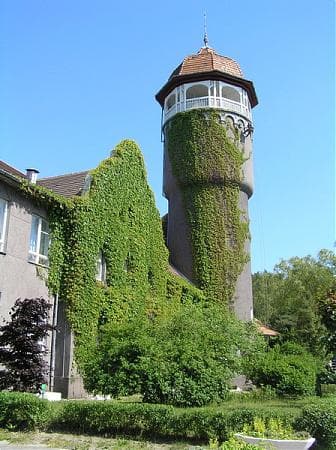 This is one of the most unusual water towers. It was built in 1907–1908 by the project of the famous in East Prussia architect O. V. Kukkuk. The building was located in the central part of the resort on Progulochnaya Alley (currently – Oktiabrskaia Str.), in close proximity to the Larch Park (still preserved, but lost its name). Sea water-mud baths took place on the branching of the streets (now Oktiabrskaia Str. and Kurortnaia Str.), which led to its G-shaped plan and the presence of excellent vantage points. As noted in the literature, a small square was formed next to the tower, so this building played a role in the urban environment, which in other cities usually belonged to town halls or cathedrals. Shortly after opening, the building received the highest accolades. An unusual shape of the tower was combined into a single architectural composition of water and mud baths. The complex was intended primarily for swimming in the sea water of those visitors to Rauschen, who found it difficult to descend to the sea on steep dunes. In addition, at the beginning of the 20th century, the city required premises to manage the resort. Thus, the building successfully connected the functions of a medical institution (water-mud baths), administrative and technical premises and public space (reading room and observation tower). The sundial appeared on the tower in 1978, the author is sculptor N. P. Frolov.