Please be informed that there are  restricted or regulated zones for foreign visitors:

Restricted zone - a territory along the border where free movement of people is restricted (marked with a green line on the map).

Transit by trains or car on the main roads is possible 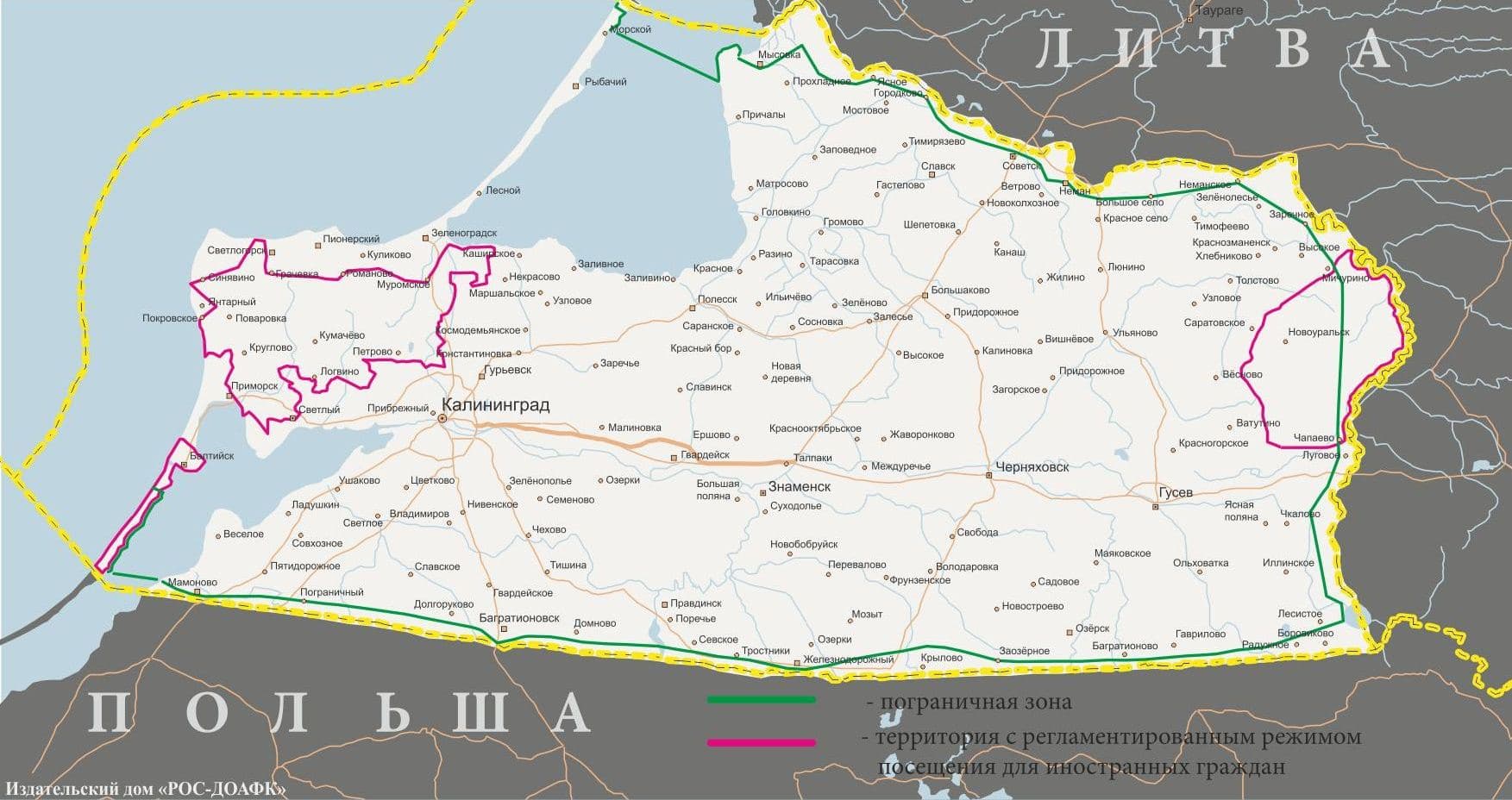 The entry of foreign citizens is possible:

- with passport or identity document;

Border area - a strip along the border of a state or territory where the free movement of people is restricted.

Travel to the open settlements and districts of the Kaliningrad region is allowed to transit by rail or by road along the highway — no special passes are required for transit of the listed territories.

According to the RULES, the entry of foreign citizens into the border area of the Kaliningrad region is possible if they have:

- individual or collective pass, which is issued by the Border Department of the Federal Security Service of Russia in the Kaliningrad region or its units.

Entry for citizens of foreign countries into the border zone of the Kaliningrad region is only possible with passports for:

- citizens registered within the border zone and members of their families;

- citizens transiting through the border zone;

To obtain a pass to the border zone, foreign citizens should contact the Frontier Department of the Federal Security Service of Russia in the Kaliningrad region. The application can be submitted by using Mail, e-mail to the following addresses: pu.kaliningradobl@fsb.ru, pu.kaliningradobl2@fsb.ru. And also with a personal appeal.

SAMPLE OF APPLICATION. A copy of the passport of a foreign citizen must be attached to the application (for over 18 years old). For clarification on all other cases, you must read the text of the Admininstrative regulation.

The term of the service is up to 30 business days.

Territory, closed for foreigners - the territory with a regulated visiting regime for foreign citizens.

The territories with a regulated visiting regime for foreign citizens in the Kaliningrad region include (unless otherwise indicated, the roads themselves are not included in the closed areas):

- the city of Baltiysk and the Baltic Spit (with the exception of the territory adjacent to the basins N 3 and 4 of the Baltic naval base, the waters of the bay of Primorskaya and Kaliningrad sea canal);

- part of the Guryevsky district, west of the Kaliningrad-Orlovka-Sosnovka-Zelenogradsk highway

- Zelenogradsky district (with the exception of part of the territory north-east of the Primorsk Ring road from the border of the Guryevsky district to the village of Luzhki and north of the Luzhki - Murom - Kovrov - Romanovo - Orekhovo line - the Svetlogorsk district border; west of the Primorsk - Yantarny - Svetlogorsk railway line the section between the borders of the Baltic region and the settlement of Yantarny; south of the Kaliningrad-Baltiysk railway) (the territory from the western coast to the settlement of Povarovka is open to the public);

- part of the Svetlogorsk district to the west of the Orekhovo-Filino straight line (Zelenogradsky district) (Filino itself is open to the public);

- part of the territory of the Svetly town (north of the village Cherepanovo, including the village, as well as from the Baltic District Forestry Department and the coast of the Primorskaya Bay from the west to the railway from the south-east);

- part of the territory of the Krasnoznamensky district and the Nesterovsky district, bounded by the Kybartai-Nesterov-Vysokoe-Dobrovolsk-Pravdino-Pobedino road and the Pobedino-Shilgalyai line (with the exception of the settlements and the road);

More detailed information can be found in the DECREE of the 2012.

Regarding visits to territories with a regulated visiting regime for foreign citizens, contact Sovetsky Prospect, 5 (FSS of Russia), tel. +7 4012 21‑48-85 (An application for a permit must be submitted no less than 5 business days).