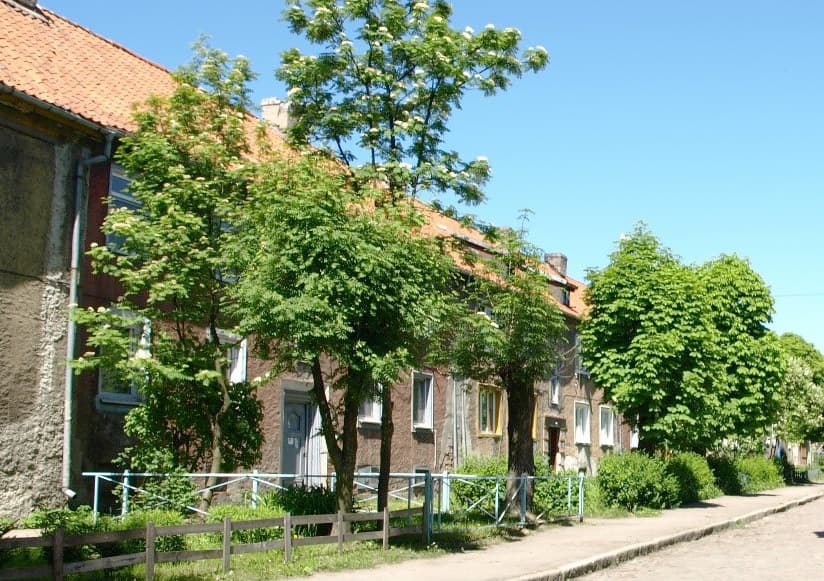 The ensemble of ‘minimal houses’ with small-sized apartments and garden plots – ‘the firstborn of color construction’ – was built on the eastern outskirts of Insterburg by the outstanding German architect G. Sharun (1893–1972) at the beginning of his career in 1920–1924. The project of the residential area by the road to Kamsviken (Kamsvikus) – on the site located beyond the railway line to Tilsit – was commissioned by the Insterburg Housing Partnership for employees in 1920. Already in 1921, the first houses (No. 4–18, in accordance with modern numbering) stood on the west side of the new street, branching off from Kamsviker Alley (later Salzburger Strasse, now Gagarin Str.). Then, on the eastern side, its ‘mirror reflection’ appeared – just the same ‘tape’ of interlocked two-storey yellow, red, and blue houses (No. 5-17). For the unusually bright colors of buildings, doors and door frames, for those times, the newborn street was named Bunte Reihe (Bunte Reihe – ‘Color Row Settlement’; now part of Elevatornaia Str.). In a unique architectural palette of the Color Row Settlement there are single and double triangular bay windows, lancet and rounded windows of staircases, a deliberately weak relief of the walls, giving, even with a low sun, plastic play of colored shadows. These houses survived, as did two small two-storeyed mansions (houses number 2 and number 3), which grew up against each other where Bunte Raye adjoins Camswicker Alley. The array of three-storey houses with long facades, pointed ends, diamond-shaped loggias and contrasting consoles was completed on the Camswicker Alley. The first, with the adjacent two-story broken semi-circular at the bridgehead, built for the urban Society of small-sized housing, destroyed by war (now there is a typical apartment block house in its place). The second, ordered by the Department of Railways, now known as the ‘house-ship’ (40 Gagarin Str.), has been preserved. The only residential complex of Sharun’s work in Russia needs to be repaired. It attracted the attention of the participants of the project ‘InsterGOD: the cultural heritage of Insterburg as a source of urban development in Chernyakhovsk’, supported by the city administration. At the first stage, an international colloquium was held with the participation of members of the Union of German Architects and the Union of German Architects. Its residents expressed their interest in restoring the original appearance of the buildings, forming a housing cooperative ‘Color Row Settlement’ (Chairman O. I. Sidorenko) and creating their own website. Graduates of the Kazan Architectural and Construction University under the guidance of experienced teachers conducted measurements of the housing estate, developed draft designs for the restoration of facades, prepare technical passports for houses.