The history of the Kaliningrad Cathedral of Christ the Savior began on April 30, 1995, the day of the celebration of the Decade of Orthodoxy in Kaliningrad. That day, from the Holy Cross Cathedral to the Victory Square, a city-wide Cross Procession was held. 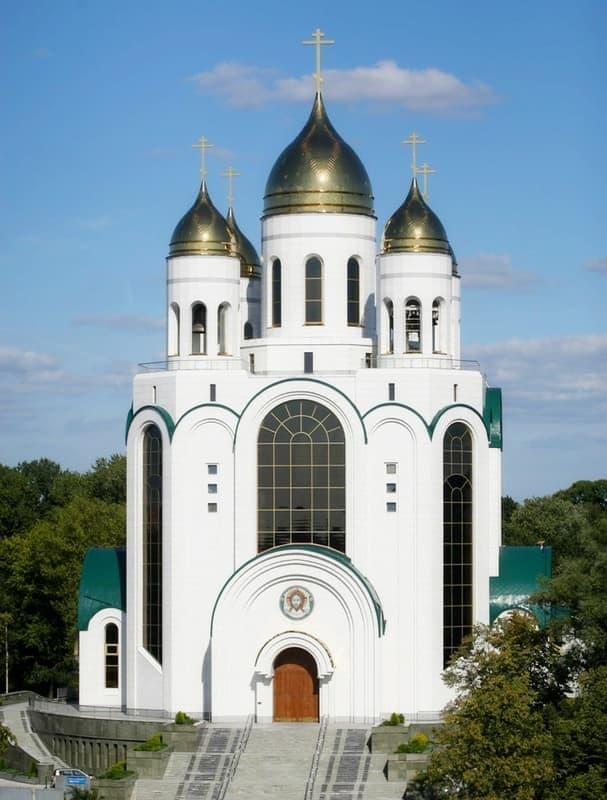 The history of the Kaliningrad Cathedral of Christ the Savior began on April 30, 1995, the day of the celebration of the Decade of Orthodoxy in Kaliningrad. That day, from the Holy Cross Cathedral to the square in Victory Square, a city-wide Cross Procession was held. After the moleben in place of the future church, Metropolitan Kirill of Smolensk and Kaliningrad (now the Most Holy Patriarch of Moscow and All Russia) consecrated a stone, and a seven-meter wooden cross was erected.
The future cathedral was to become a symbol of Orthodoxy on the Kaliningrad land. Until 1985, there was not a single Orthodox church in Kaliningrad, and the parishes that were later opened, operated, as a rule, within the walls of German religious buildings, which needed restoration. The Cathedral of Christ the Savior was intended to be the first church in the city, built in accordance with the canons of the Russian Orthodox architecture - the white stone cathedral with five golden domes, similar to the churches of the Pskov Kremlin. The hegumen Mercuriy (Ivanov), now Metropolitan of Rostov and Novocherkassk, was appointed the first rector of the cathedral, which was still under designing.
In May 1995, the shape of the future church was determined; its author was architect Oleg Kopylov. The project was approved by His Holiness Patriarch Alexis II of Moscow and All Russia.
On the 23rd of June, 1996, the capsule with the consecrated land, taken from under the walls of the Cathedral of Christ the Savior in Moscow, was laid into the foundation of the future cathedral.
At the end of June 1996, a minor wooden Cathedral of Christ the Savior was erected near the construction site of the main cathedral. This church was consecrated by Metropolitan Kirill of Kaliningrad and Smolensk, in honor of the Holy Face of the Lord. The first festive divine service was held on September 27, 1996. This church stood next to the cathedral under construction until 2009, after this it was dismantled and reassembled again in the Kaliningrad district Selma.
The architecture of the ensemble of the Cathedral of Christ the Savior is designed in the style of the Vladimir-Suzdal church architecture. The building of the cathedral is an octagon with protruding arched entrance portals. The five-dome cathedral is crowned with the sixth dome from the Eastern side above the altar apse in order to symbolize the biblical epaulet. The helmet-shaped domes were created in the ancient Byzantine temple style.
The total height of the cathedral is 69 meters. The glazing area is more than 1000 square meters, the area of granite-marble cladding and floors is about 11 thousand square meters. On the belfry of the temple there are 13 bells, the largest of which weighs 14 tons.
The upper church of the Cathedral with a capacity of 3 thousand people is dedicated to the feast of the Nativity of Christ. The lower church in honor of the icon of Christ the Savior (Sudarium) is located in the basement of the stylobate and is designed for 400 people.
The Upper Church of the Nativity of Christ was consecrated on September 10, 2006 by Patriarch of Moscow and All Russia Alexis II. The lower church in the name of the Holy Savior's image was consecrated on September 27, 2007 by Metropolitan Kirill of Smolensk and Kaliningrad. The iconostasis, which was created during the Seven-Year War for the Russian garrison in Memel (now Klaipeda), handed-over in 1996 by the Holy Prince-Vladimir Brotherhood from Germany, was installed in the church.