The Kaliningrad region is one of the smallest regions in Russia.

But, despite this, you can find a wide variety of natural landscapes. And oak groves, pine forests, and many kilometers of bogs and meadows, and even sand dunes on the Curonian Spit.

The entire Kaliningrad region is dotted with rivers, rivers and streams. And on the sea coast are the main Kaliningrad resorts - Svetlogorsk and Zelenogradsk. They have the status of federal. However, you can relax on the sea and in other wonderful towns of the coast: Pionersk or Yantarnyj.

You can rest in the Kaliningrad region not only in the summer. Healing air and developed network of balneological institutions allow you to rest and be treated throughout the year.

Vistula Spit – an amazing natural monument that has preserved its virgin charm.

The Vistula Spit is named one of the most unusual peninsulas in the world,   writes the portal   The World Geography.

When compiling the rating, the portal estimated the beauty and tourist values of the Vistula Spit, which has a length of almost 100 km, and is located on the territory of Poland and Russia. 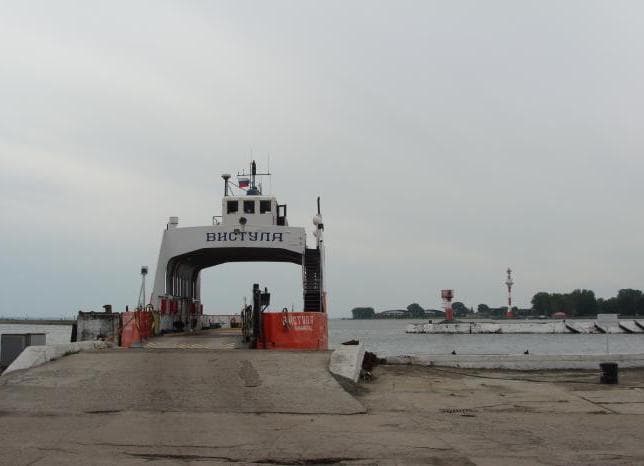 You can get to the Vistula Spit by taking the ferry from Baltiysk. 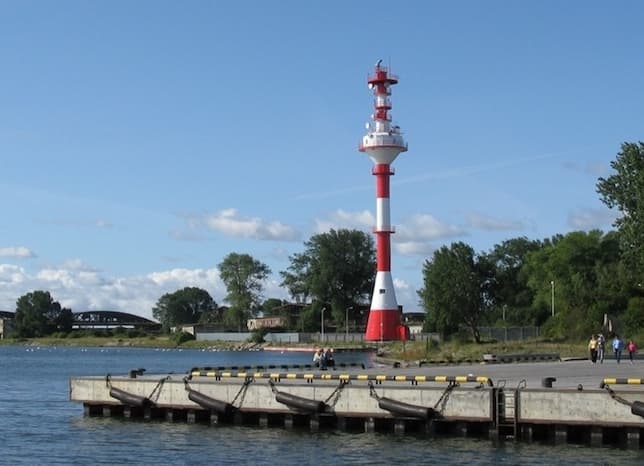 The spit ranks fifth in the ranking after such attractions as the Canadian La Dune de Bouctouche, Zlatni Rat in Croatia, the Spanish La Manga del Mar Menor, and Ocean City in America.

On the one hand, because of this infrastructure on the spit is practically absent except for a small tourist camp, on the other hand, here tourists have a unique chance to feel themselves "savages". 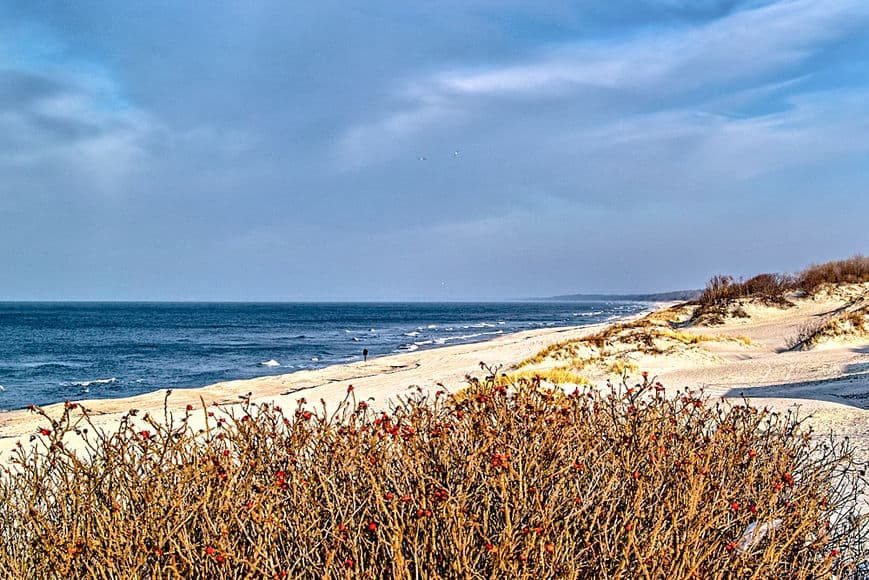 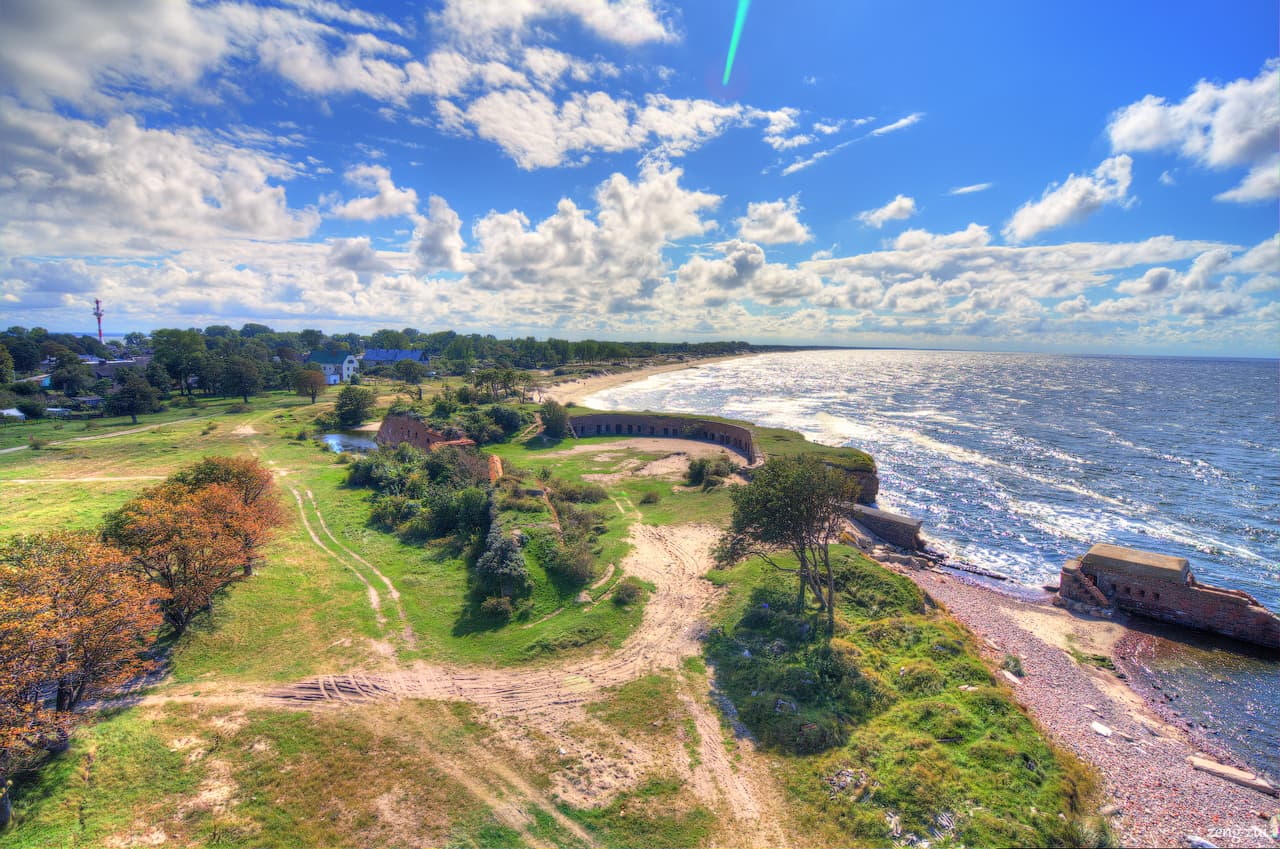 At your service endless beaches, the Baltic Sea and the freshwater Vistula Lagoon, pine forests full of berries fields. Extreme fans can explore the dungeons of a former military base, and street racers arrange races on the runway of an abandoned military airfield. 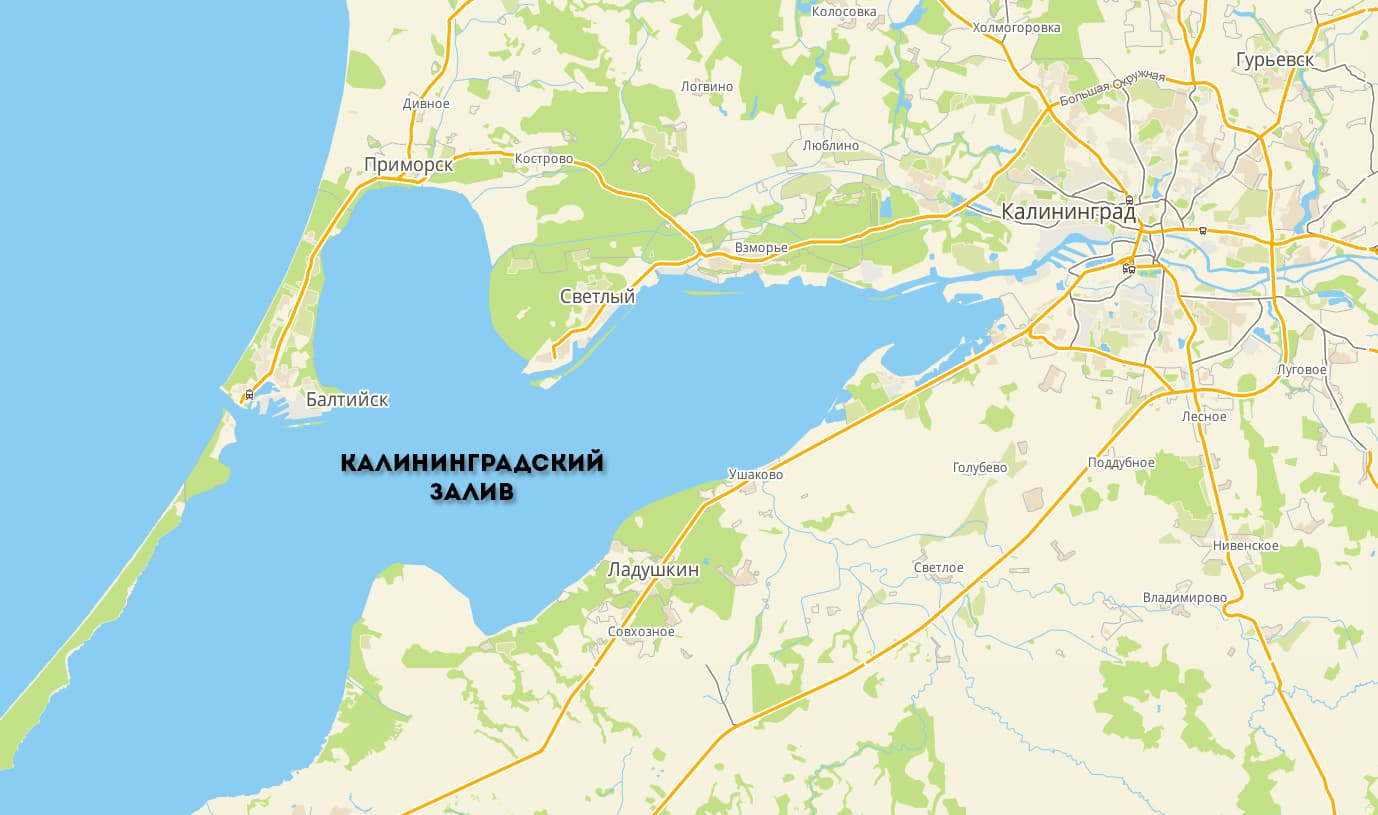 The Vistula Spit separates from the sea another extraordinary sight of the southern shore of the Baltic Sea - the Vistula Lagoon.


It is a beautiful lagoon that combines salty and fresh water, in the common people called transitional waters.

In the south-east of the region is located the Red Forest - the legendary Rominten, which was once the biggest forest in Germany.

The Rominten Forest or the Red Forest is a huge natural park in the Vyshtynets Upland. The largest part (2/3) is located in Russia, and the smaller (1/3) - Poland. The area of the largest in the forest area is about 360 km2. 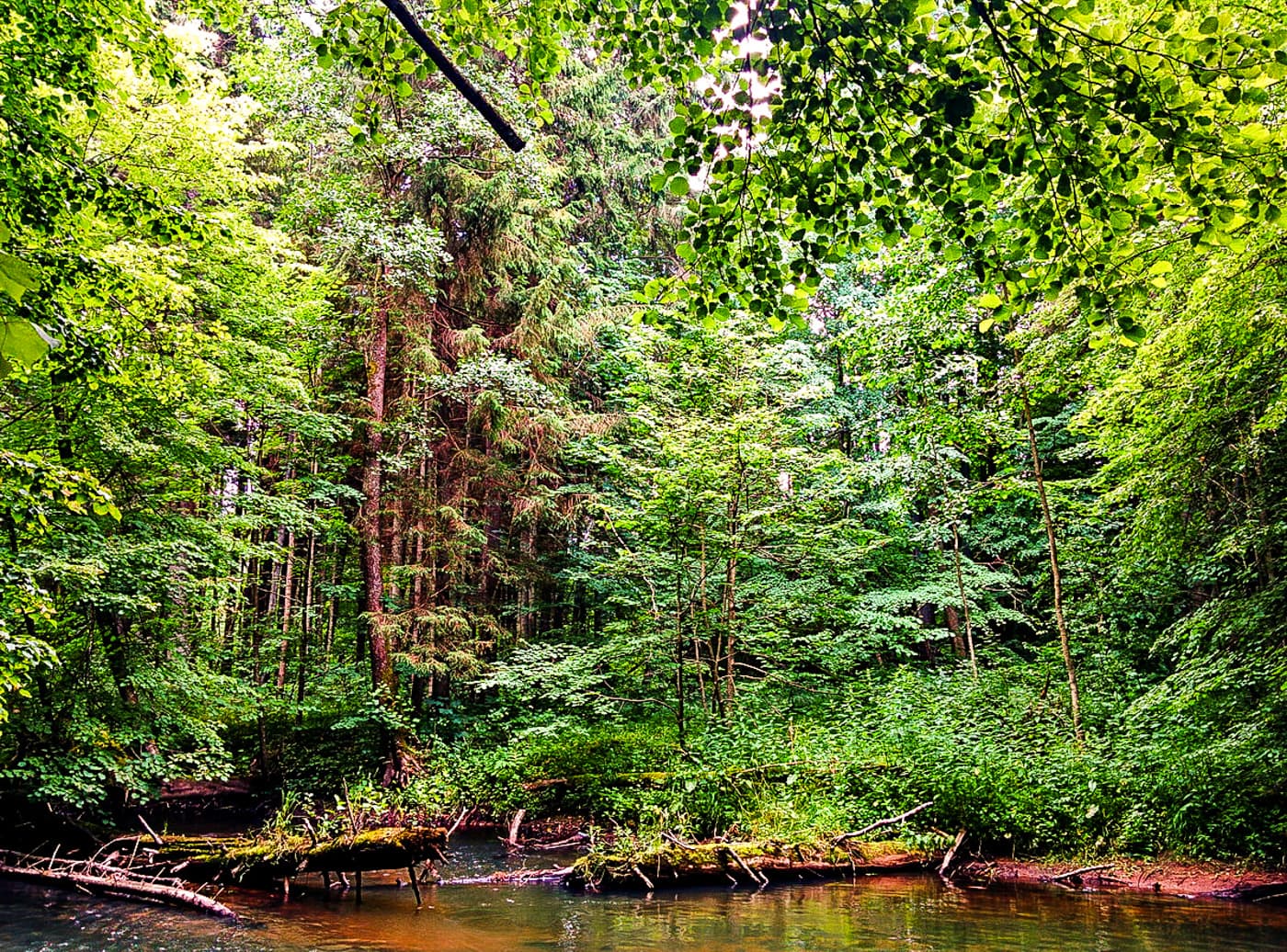 The alternation of hills, valleys and hollows, gentle slopes turning into colorful lakes - all this was formed in the ice age. Thanks to this relief, the terrain has its own special quiet and calm climate.

Since the time of the Teutonic Order, the Romintskaya Pushcha was a place where a weekly hunt was held for the Order Grandmasters. 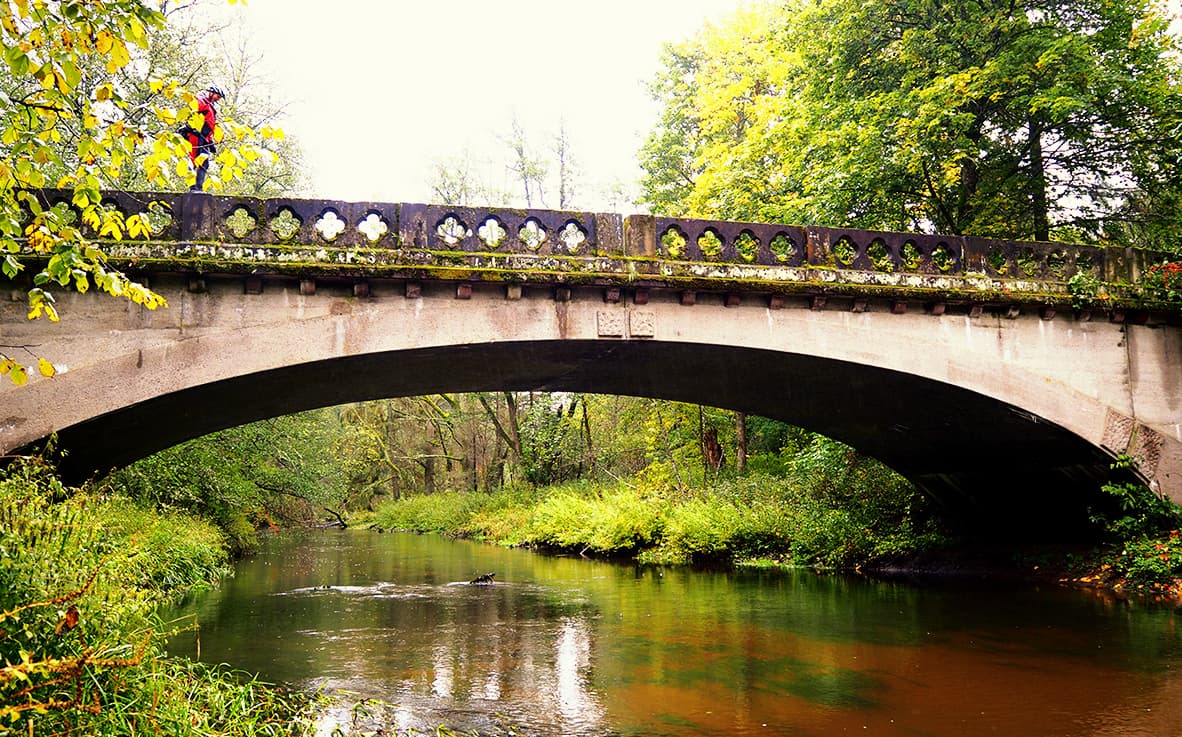 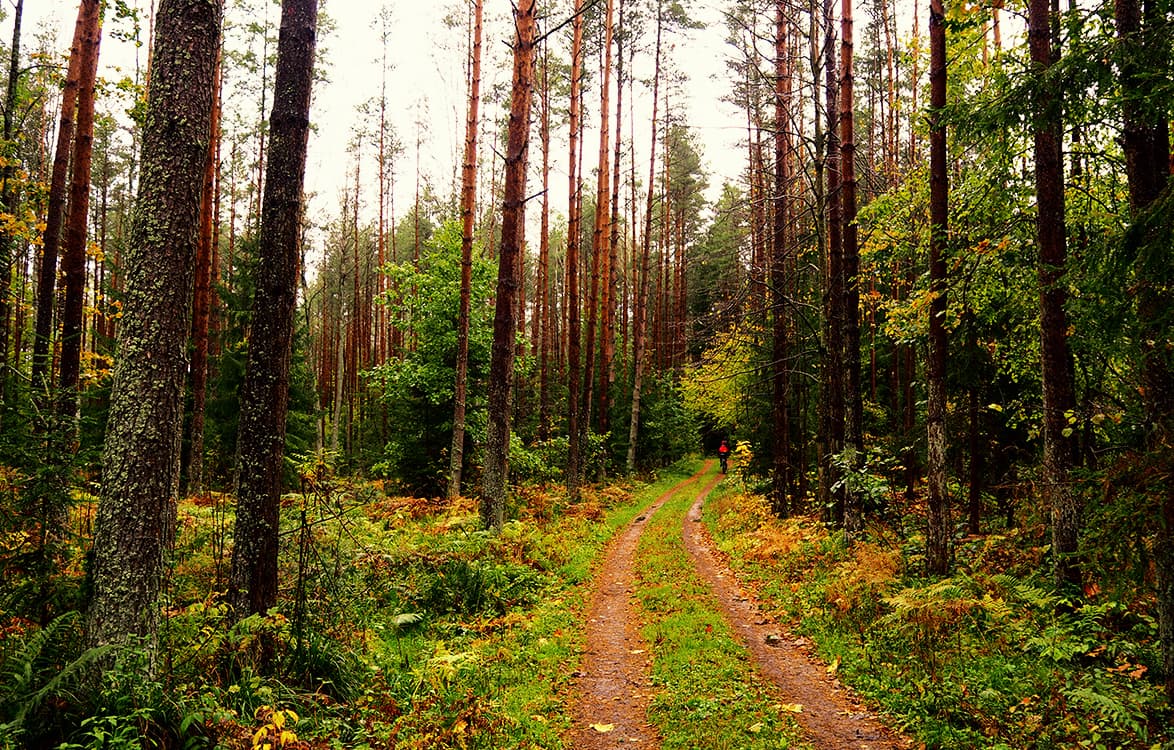 A unique forest landscape has become the home of many animals.

Fourteen species of fish are found in the Red River, including eels, pike, naz, barbel, and trout.

The flora of the Red Forest is no less diverse - about 100 plant species are considered rare.


Romintskaya Pushcha is a paradise for cycling and hiking. 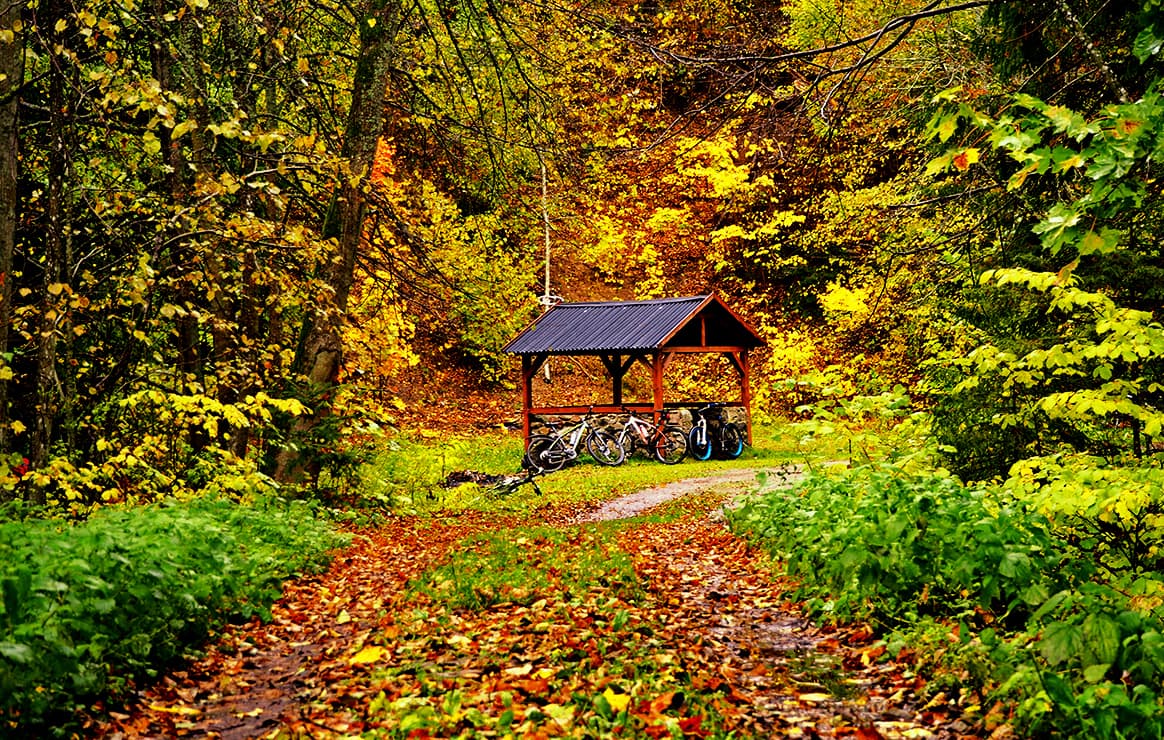 There are many cycling routes that will allow you to taste the beauty of the area in its fullness. This is facilitated by excellent paths, passing through forests, meadows and lakes. 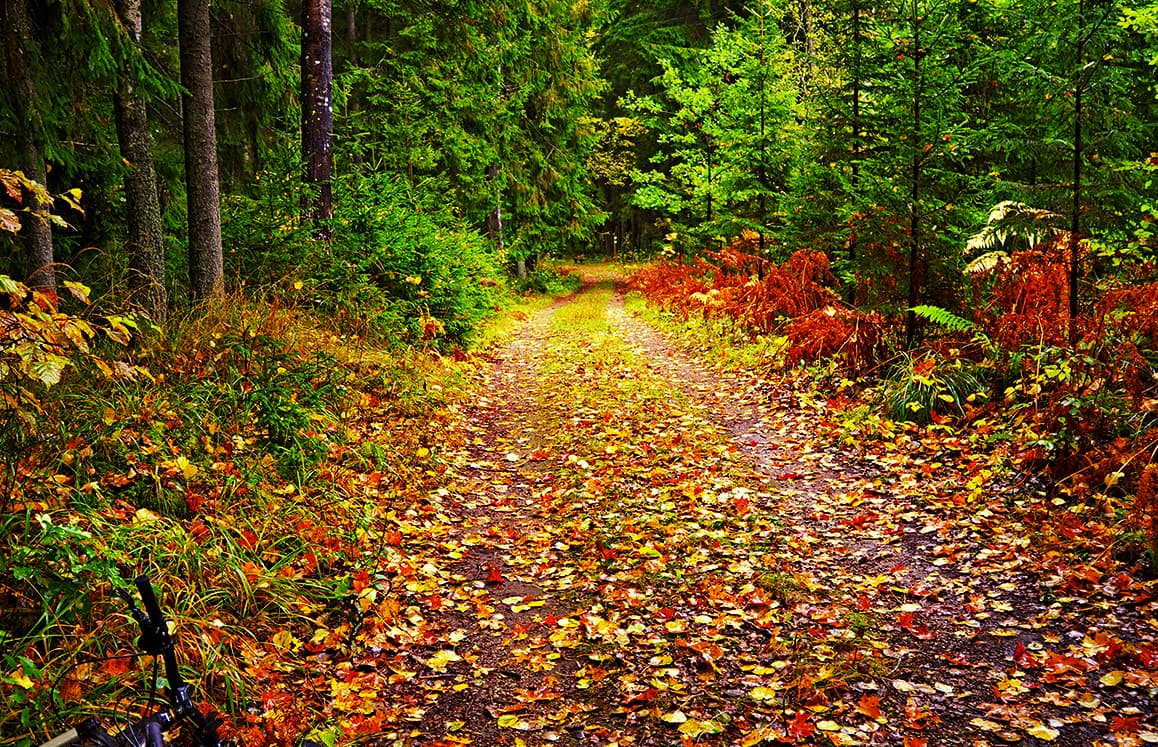 You can walk in the Red Forest for hours - a variety of landscapes, murmurs of brooks, lakes, mushrooms, berries and bird chime.

Lake Vištytis is a unique lake of glacial origin and is the oldest, deepest, largest, cleanest in the Kaliningrad region, it is often called the European Baikal. 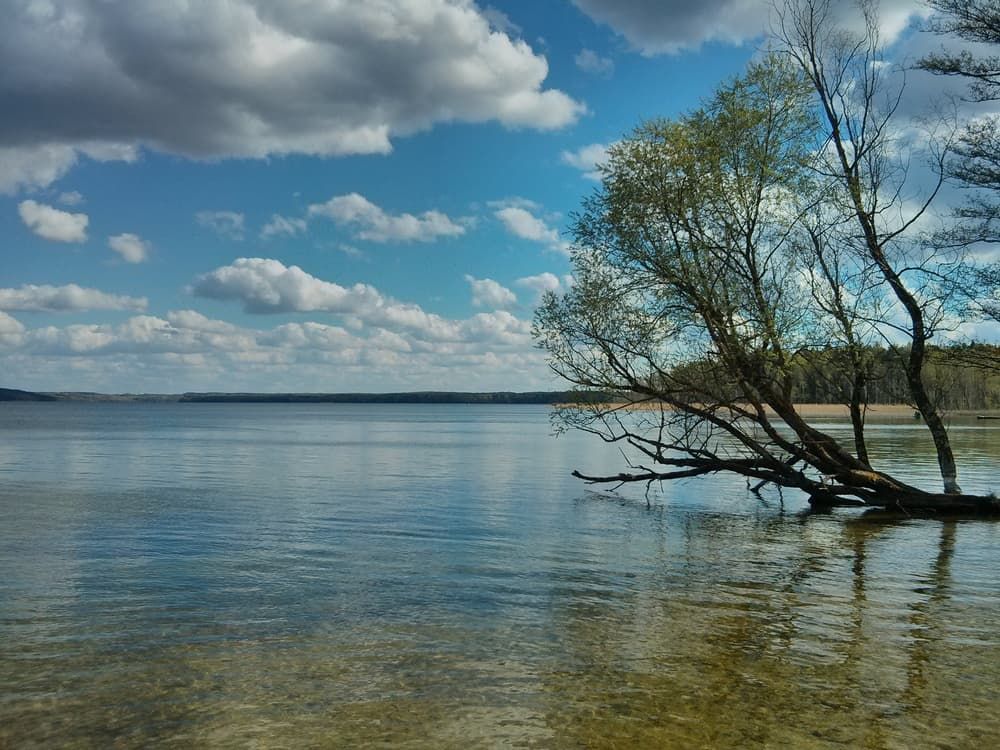 Lake Vištytis is rightly considered one of the main natural treasures of the south-eastern part of the region. The reason for this is not only the impressive size of the lake, but also the purest water, the volume of which is so great that it can be regarded as the most valuable sources of drinking water in Europe. All this, plus remoteness from settlements, makes Lake Vištytis an excellent place for a relaxing holiday alone with nature. 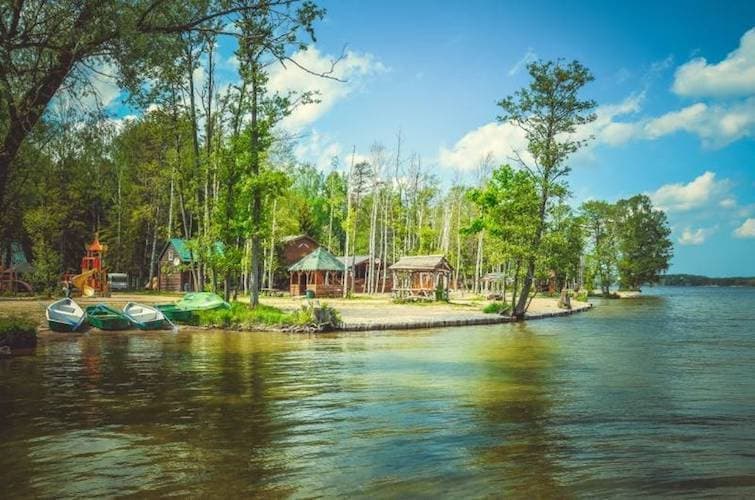 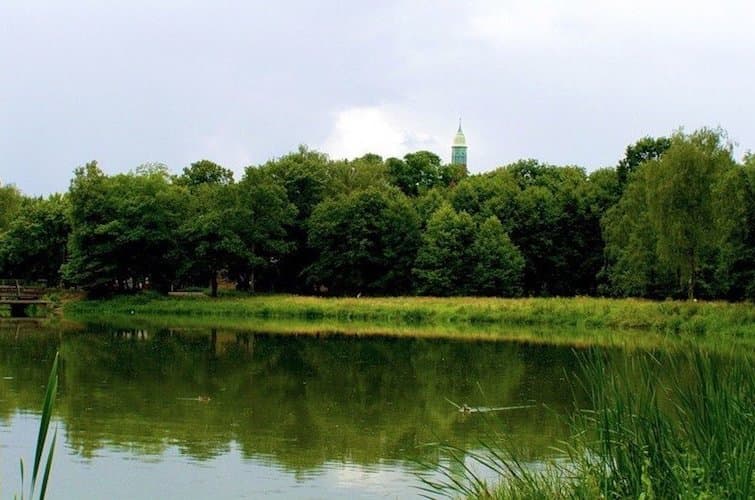 To get to the lake is best by car - first to the town of Nesterov, then to the south through the village of Nevskoye. Another option is possible - to Nesterov by bus or train, and from there - by bus.

Be sure to stop at Berry, where the river Pissa flowing from the lake is blocked by a dam, on which are located the picturesque ruins of the old mill.

In order to get better acquainted with the surrounding natural world of this area, you can stay in one of the rural estates of the Nesterovo district. 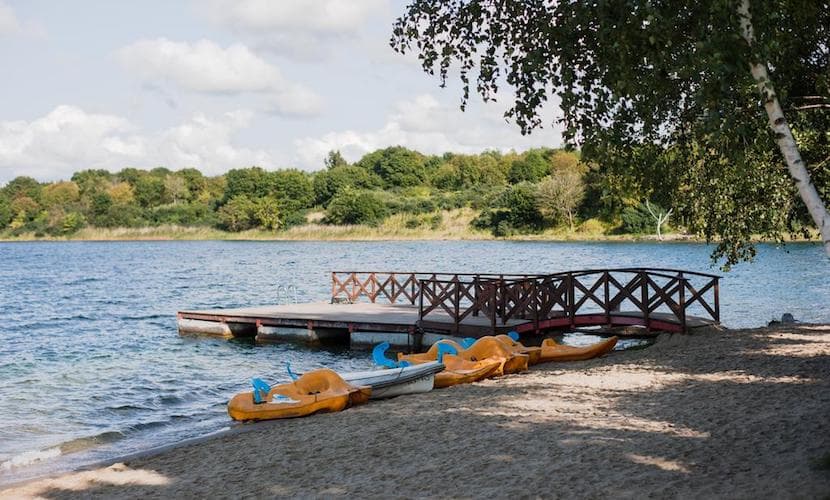 There are places on earth that invariably evoke feelings of wonder and admiration. One of such inimitable parts of our land is the Curonian Spit, a narrow strip of land between the Baltic Sea and the Curonian Lagoon, which stretches for 97 km from Zelenogradsk to Klaipeda.


If you come to the Kaliningrad region for one day and you have time to inspect only one site, do not waste time thinking - you simply have to visit the Curonian Spit. It is not accidental that the National Park "Curonian Spit" is included in the register of the UNESCO protected natural heritage.

In the narrowest part, the width of the spit is 800 meters, in the widest - 2 kilometers, the total length - 98 kilometers. Since 1987, the Curonian Spit is a national park, and in 2000 it was entered by UNESCO into the World Register of Natural Heritage. 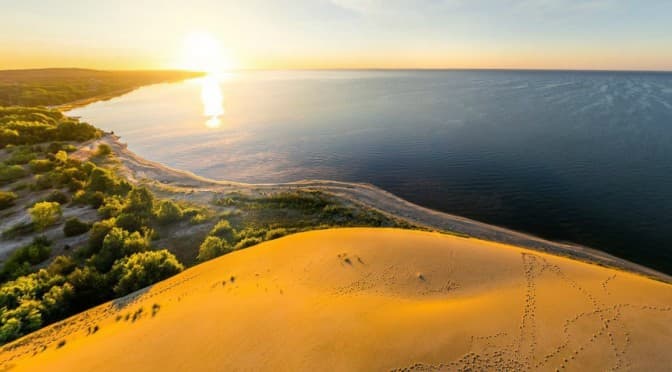 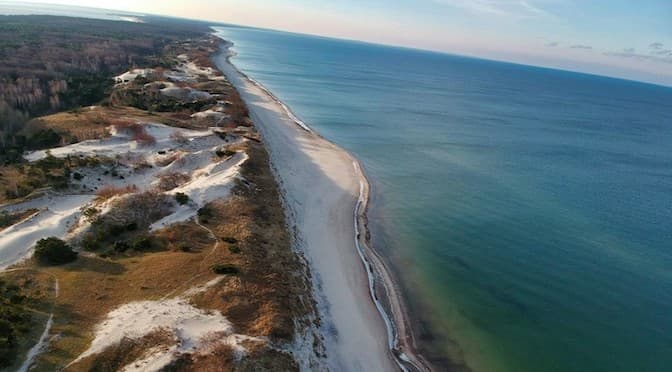 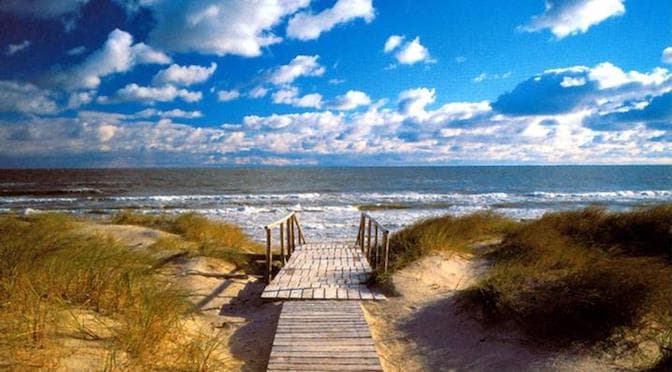 The Curonian Spit is sometimes called the "bird bridge", migrating birds on the way from north to south stop here. If you are lucky, you can become a witness, and sometimes a participant in the ringing.

A special attraction of the Curonian Spit is the local ornithological station "Fringilla", one of the first in the world. 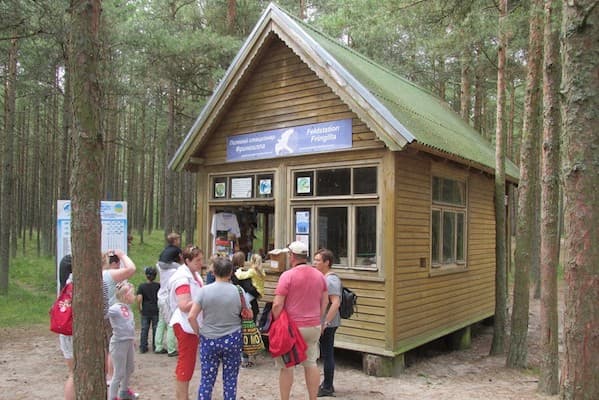 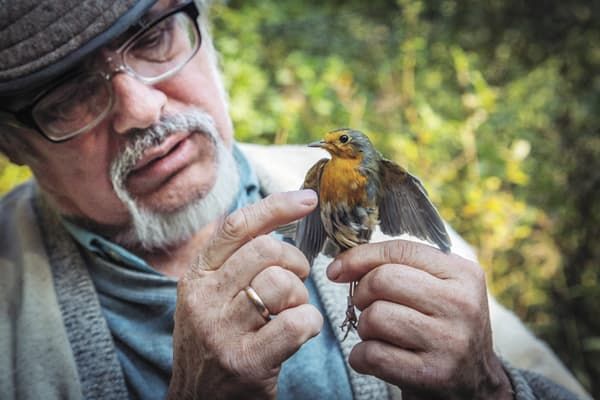 One of the most attractive sights of the Curonian Spit is the picturesque dune Efa, which stretches for 16 km.

This unique sandy mound is recognized as one of the largest in Europe.

The dune "Height of Efa" was named in honor of the dune inspector Franz Ef, whose activity was devoted to the study and fixation of mobile sands.

The highest point of the dune is 55 meters 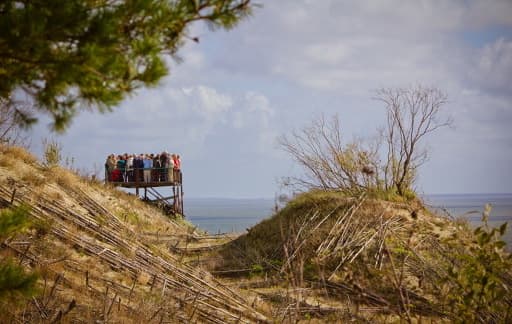 From the viewing platforms all the diversity of the scythe landscapes opens: the sea, the bay, the spaces covered with forest.

Dancing forest is a unique place, located in the national park "Curonian Spit".

This forest is striking because almost all its pine trees are bizarrely bent, branched or even twisted into a ring. And there are no other trees in this forest.

There is a forest on the 38th kilometer of the road, which runs along the spit towards Lithuania.

A logical explanation of the "dancing forest" has not yet been given by anyone, which does not prevent to enjoy the sight of this unique natural phenomenon.

You can get to the Curonian Spit by taxi, bus or private transport. Passengers of private transport and taxis are charged an environmental fee, the amount of which depends on the type of car and the number of passengers.

Buses to the Curonian Spit and along it run from Kaliningrad, Zelenogradsk and Svetlogorsk - 3-4 times a day. If you go by bus, ask the driver to stop near the Dancing Forest.

The mystery enveloping the origin of the phenomenon, mysticism and unusual form of trees make the place especially attractive for tourists. Such interest has also led to negative consequences for the forest - trampling of the soil, damage to the bark of trees. To protect and preserve trees, the territory of the "Dancing Forest" was fenced off, for tourists, a special path was laid out of the wooden flooring.

Come to visit us to see everything with your own eyes! Believe me, you will want to come back here more than once.